This is Shakil from Product Engineering Department. This time I wanted to talk a bit about Markov Decision Processes which forms the basis of Reinforcement Learning.

What are MDPs (Markov Decision Processes)?

MDP provides a mathematical toolset to model Problems involving decision making in sequences where what the future state is going to be depends only on the actions taken from the present state.

Why are MDPs interesting?

MDPs can be used to model and solve a wide range of problems, from Self-Driving Cars, to Recommendation Systems to Complex Video Games like DOTA 2.

Open AI 5 by DeepMind defeated human world Champions of DOTA 2 in 2019 by using MDPs as one of the tools to model and master the game.

So how can we model a problem with MDPs?

in order to be modeled by a Markov Decision Process, a problem must must have the following properties.

For example, in DOTA 2 a possible observable State

, could be enemy having 9 remaining towers . An Action

, could be attacking one of the towers and another State

, would be the enemy having 8 towers remaining. Here, you can make a transition from

depends on being in state

to begin with. When transitioning from

the acting agent can get a small reward

, for destroying an enemy tower as it has brought it closer to winning the game.

A state is what an actor in an environment observes at a given timestep. The state should be defined such that it contains all the information that affects the transition to a future state from the current one. For example in the following Grid World environment, a state is one of the boxes in the grid. It can be represented as a coordinate like (0, 0).

An action Policy function gives us the probabilities the possible actions an Actor can take given a State,

For example in the following figure, the Question is a State, and the Options A B C D are the possible actions that the Actor can take in this state.

Often problems we model with MDPs are non-deterministic i.e. taking the same action in the same state can take us to different future states as illustrated in the example below.

To model this non-determinism that is often seen in real life scenarios, MDP has a State Transition Probability Function which gives us the probability of transitioning to a State,

, given our current state

γ ∈ [0, 1] is a discount factor representing the difference in importance between present and future rewards.

Discount Factor is a value is between 0 and 1. Discount factor basically acts as a weight which is used to reduce the importance of States and rewards received that are further away from the current State. More about this is discussed in the Aggregate Reward/Return section.

The Aggregate Rewards or Return for a State

is the sum of total rewards that an Actor receives from an Environment, starting from state

, till the end of an Episode or until an certain timestep,

Rewards that are further timesteps away from the State,

for which the Return is calculated, are weighted lower by multiplying the discount factor (which as mentioned as before should be between 0 and 1). The Discount Factor is exponentiated the further timesteps away from state

the the reward was received. This is done so that the Actor gives more importance to States and rewards nearer to it.

is the Aggregate Return

In the Example Below, as the States get closer,

, to the actual reward in green, their Aggregate Reward increases to indicate that a real large reward is nearby. While states that are further away,

, get a smaller portion of the same reward due to the weighting the discount rate applies to rewards that are further timesteps away. 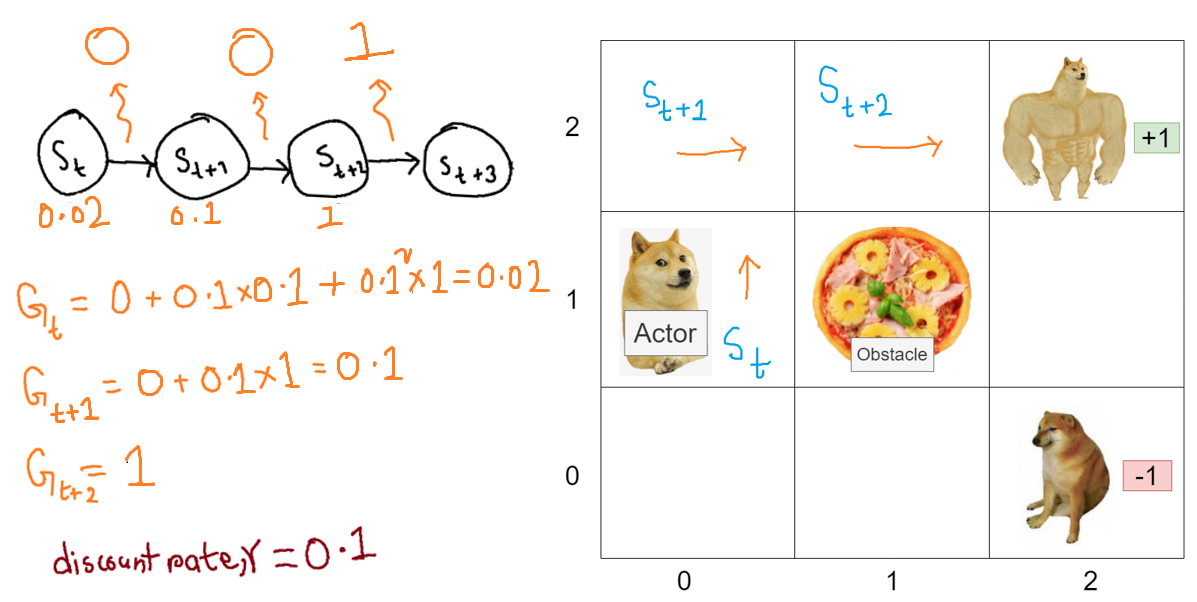